At the group headquarters of power tool manufacturer STIHL in Waiblingen, Baden-Württemberg, the MTM method standard has long been established. Since the end of 2021, the Austrian site STIHL Tirol GmbH has also had it in writing: With the seal of approval "approved by MTM ASSOCIATION", the industry association confirms the company's correct MTM application in accordance with the regulations. STIHL Tirol, based in Langkampfen, specializes in the manufacture of battery-powered gardening tools such as lawn mowers or robotic mowers and is a wholly owned subsidiary of the STIHL Group.

"This certificate is very important to STIHL Tirol and that is why we also received great support in carrying out the audit," says Johann Exenberger, Labor and Time Studies Officer, who was responsible for the audit at STIHL Tirol. He says that the results of the time management projects at the headquarters in Waiblingen were also excellent for the Tyrolean subsidiary, "but we also wanted to implement this standard in our own development projects." And not just selectively, but along the entire product development process – "from development and design to series production support," emphasizes Exenberger. In his opinion, starting early, e.g. already on the basis of 3D data in product development, is also becoming increasingly important with regard to the efficiency of the planning process. The MTM Toolbox and MTM software solutions such as TiCon4 support this.

Empowerment for operational excellence
The "approved by MTM ASSOCIATION" seal of quality is awarded not only for the compliant use of MTM to determine time data. The seal is also awarded for the maturity of the work organization and the efficiency of the time management processes, the holistic nature of the MTM application, the derivation of improvement measures on the store floor and, in general, the meaningful anchoring of industrial engineering in the company. "A company needs all of this to improve its operating results based on key performance indicators," says Ralf L. Jaehnke, business unit manager consulting at Deutsche MTM-Gesellschaft mbH. And this is where MTM makes the difference, he adds: "We don't create operational excellence, we enable operational excellence – a much more sustainable approach."

Determining time data AND discovering potential
Those involved in the project at STIHL Tirol in Langkampfen also recognized that the use of MTM brings much more than just "times". "During the audit, we discovered lots of potential for improvement, such as in ergonomics," says Exenberger. So it came in handy that the auditor, Dr. Steffen Rast, contributed his expertise as head of the ergonomics department at German MTM-Gesellschaft mbH and as an expert in the EAWS (Ergonomic Assessment Worksheet) ergonomics assessment tool. According to Exenberger, the aim now is to draw up an ergo map of the company and thus identify those workplaces that can be better designed from an ergonomic and thus also from an economic point of view. 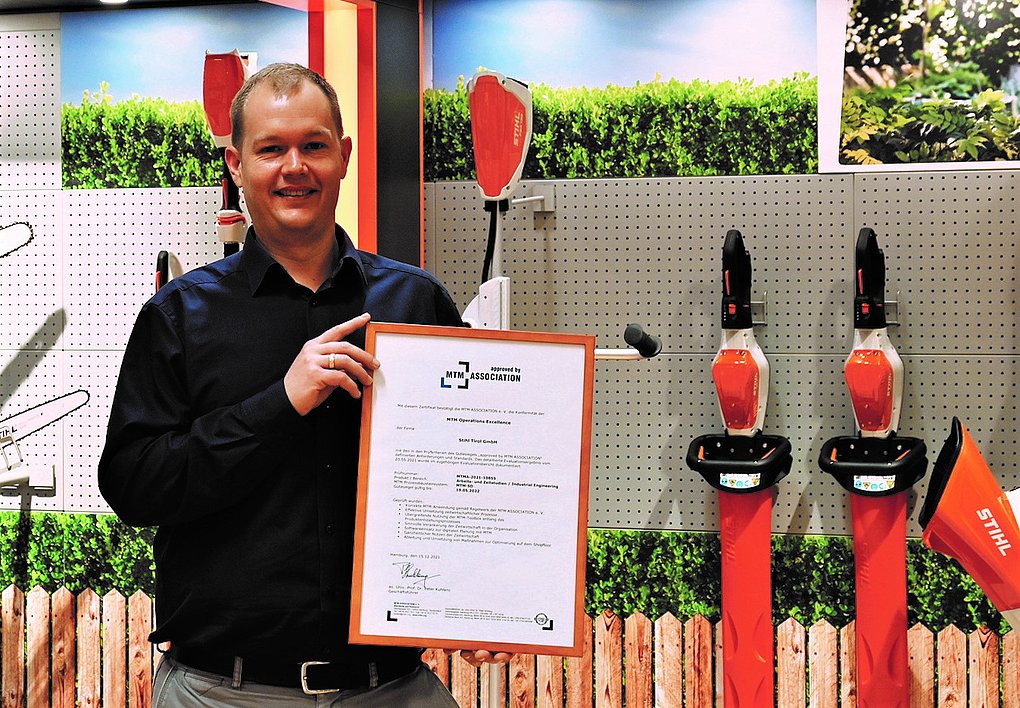 Johann Exenberger with the certificate at the official appointment in Tirol – Picture credits: STIHL Tirol

Systematic time management makes for success
The results and the positive feedback from the management encourage the Industrial Engineer to consistently continue on the path with MTM. For example, the seal of approval for the correct application of the MTM-SD process building block system (standard data) could be followed by the "approved by MTM ASSOCIATION" for the MTM-UAS process building block system – "we also have products with longer throughput times, so MTM-UAS is more suitable," explains Exenberger. In addition, he says, the company wants to take a look at logistics processes, e.g. material provisioning on the assembly line. The STIHL Tirol management is also very interested in the MTM tools ProKon (production-oriented design) or ProKonE for ergonomic design – "These are definitely interesting tasks for the next few years," says the speaker. He is pleased that the importance of systematic time management for the company's success has been recognized and that the newly created Work and Time Studies group at STIHL Tirol can take the initiative here.