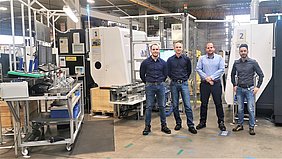 Continually analyzing and improving processes is one of the central success factors at corporations. In the case of INTERROLL Trommelmotoren GmbH, which is based at Hückelhoven in the Rural District of Heinsberg and manufactures drive systems for conveyor belts used in fields like food processing, this has been a matter of course since it was founded. However, the corporation is also open to adopting new procedures when it comes to product calculations, production and resource planning – and particularly when planning its human resources needs. The managers are fully aware of the importance of time as t h e control parameter within the corporation to gear its work to creating value added and increase productivity – and it therefore relies on the MTM methods standard too.

Facts and figures – the basis for rapid and correct decisions

“The corporation has been increasingly focusing on further optimization potential in its value-added chain during the last few years,” says André Honigs, Head of Industrial Engineering (IE). “We’ve mainly used lean management methods and Refa performance rating for this. But even after successfully implementing them, we reached a point where we were no longer achieving a great deal with these methods at our business site. We recognized that we needed to change the organization and reorganize our processes. By using MTM, we can now map processes in far greater detail and – above all – make changes and effects visible immediately. The managers place particular importance on this, because facts and figures form the basis for rapid and correct decisions.”

Achieving the planned reduction in throughput times by using MTM
What does MTM achieve? It was already possible to provide evidence of the effects required by the managers in the preliminary study that INTERRIOLL ordered from Deutsche MTM-Gesellschaft mbH. This was followed by a pilot project in the final assembly department in 2018. The first project in the production department has now been successfully completed too. “Success for us means that we’ve achieved the planned reduction in throughput times by using MTM,” the IE Manager states. “However, what’s even more important than the pure figures is that all the employees, the specialist departments involved and the works council have seen that change works. We’ve become a learning organization!” Honigs summarizes developments personally in this way, “The system works – we would adopt the MTM approach again and again.”

Keeping your distance and achieving production goals
Even in the current situation, two main things are benefiting the corporation, which is part of the Swiss Interroll Group, the leading provider of solutions for material flows: The organizational instructions for dealing with the corona pandemic, which were already introduced at an early stage, and the work system designed with the help of MTM. “We’ve introduced a so-called caravan principle in our production department – i.e. only one person per machine – and planned the individual work stages with MTM. As a result, we can maintain the necessary distances between employees and achieve our production goals.”

"Every day brings new insights"
In what other ways is INTERROLL planning to use MTM? According to the IE Manager, the focus is initially on production operations at Hückelhoven. “We now need to introduce sustainability to the processes that have been organized with the help of MTM and fine-tune them by means of regular audits,” says Honigs. “Every day brings new insights – and they need to be integrated in the ongoing production processes.” One core issue for the industrial engineers at INTERROLL Trommelmotoren GmbH will be line balancing from the production transfer point to internal logistics during the next few months.