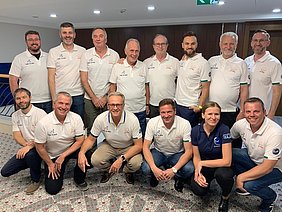 The members of the International MTM Directorate (IMD) voted on 25 January 2020 in Milan with the required 2/3 majority to dissolve the organisation, which was founded in 1957. This clears the way for the establishment of One-MTM, a new, sustainable business model for the worldwide uniform training and distribution of the process language MTM. The background to the decision is the number of certificates issued via the IMD, which has been declining for years despite all efforts. In the opinion of the majority of members, this development cannot be reversed under the framework conditions of the IMD. One-MTM started on 02.02.2020.

10 national MTM associations in the IMD – these are Brazil, Germany, Italy, Mexico, Austria, Poland, South Africa, Czech Republic/Slovakia, United Kingdom and Hungary – and partners in China and the USA will cooperate in the partner network One-MTM. The One-MTM headquarters are located at the MTM ASSOCIATION e. V. in Germany.

The partners agree that the mission, which is fixed in the association's statutes, to establish MTM as a global standard, can only be fulfilled if MTM is uniformly distributed worldwide through training, software, consulting and research. This requires a defined qualification structure, a strong brand, an effective business model and global distribution of MTM products and services. The MTM associations of France, Turkey, Switzerland, Spain and Scandinavia, which do not join One-MTM, have considered their own alternative to IMD, but expressed in Milan their interest in principle to cooperate with the new partner network.

With One-MTM, a powerful organisation is created which has the necessary resources to position MTM sustainably on the market, to develop efficient tools and to make quick decisions - and which brings those partners on board who commit themselves to the One-MTM training standard. With the start of the operative business of One-MTM on February 2, 2020, MTM certificates will only be issued in Germany at the MTM ASSOCIATION e. V. and therefore all partners will pay uniform fees to the network. The uniform training structure of MTM ASSOCIATION e. V. shall be implemented by all partners in the medium term.

Knuth Jasker, Prof. Dr. Peter Kuhlang, MTM ASSOCIATION e. V., and Gabriele Caragnano, Fondazione Ergo-MTM Italia, were entrusted with the development of the organizational structure of One-MTM. According to the coordinators, the commitment at the recent meeting in Milan shows that the partners are very interested in combining their financial and administrative resources, pooling ideas and initiatives for the further development of MTM and thus investing in the future of MTM on the basis of a trustful cooperation.